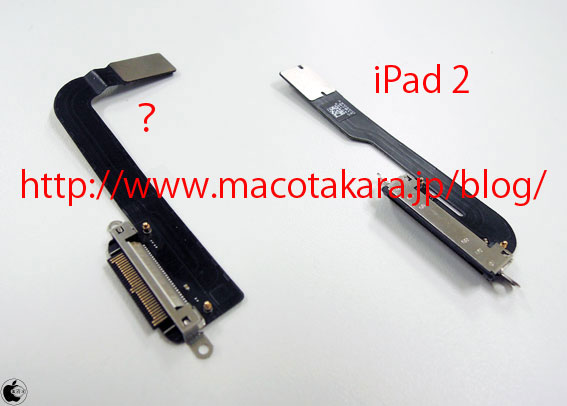 More supposed iPad 3 parts have surfaced that appear to show differences between existing iPad 2 hardware and an unknown device. Published by Macotakara, the new photos show an existing iPad 2 dock connector cable alongside the new part, which it is speculated belongs to Apple’s third generation iPad.

Just as any sane person would predict, Apple appears to be sticking to its classic 30-pin dock connector as a source of power and a way of syncing, rather than moving to the industry standard USB solution that is preferred by much of the competition…

With the iPad 3 rumors now beginning to really heat up, we expect more photos to leak claiming to be of iPad 3 parts. This current one comes after Macotakara spotted them on TVC-Mall.com, a web site owned by one of Apple’s own parts suppliers. This isn’t the first time such a leak has occurred, and we are certainly surprised that Apple has yet to plug the leak.

While the appearance of a dock connector in the iPad 3 is no surprise, it is worth noting that the change in attached cable could well point to a change of internals in Apple’s next tablet, as expected. A rumored Retina display could be one reason for different internal components, as could a new chip to replace the current A5. We’ll no doubt hear more over the coming weeks as we get closer to what we all expect to be an iPad announcement in early-2012.