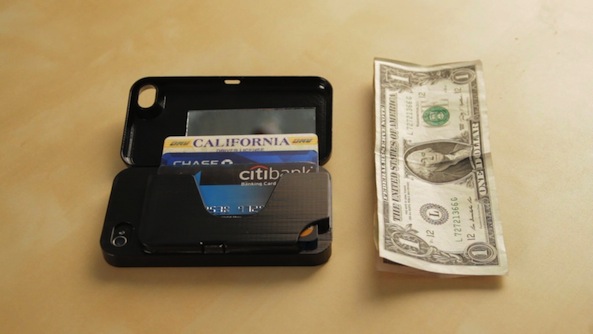 What I really like about Kickstarter is that anyone can come up with an idea, get funding, and turn a concept into a prototype that will eventually become an actual product.

With that in mind, it’s amazing to see that product development is not only for big companies anymore, but for people like you and me to create something awesome. This is exactly what Eddie Hsieh is trying to do.

When he couldn’t find what he was looking for, he decided to create it. This is when the CASELLET (case/wallet) concept was born. Eddie now needs to raise $22,000 to bring his product to life, so we sat down with him and asked him about his project…

How did you get the idea of CASELLET?

During college, it was always inconvenient to hold my wallet and my phone when going to class, the gym, or a night out. Soon after moving to Downtown LA, I made a thin wallet out of cardboard and duct-tape and velcroed it to the back of my phone. It immediately changed the convenience of everyday errands. I no longer had to worry about my wallet being in the pockets of yesterdays’ jeans, in my cars cup-holder, or on my nightstand. It was always where my phone was. And since I never go more than a few minutes without checking email, writing text messages or making phone calls, locating and carrying my wallet was much more convenient. I figure many other people could benefit from this also and started the project.

I looked online and in stores and nothing fulfilled exactly what I wanted. The card holding cases doesn’t carry cash and exposes all my items. The leather cases made it annoying to text or make phone calls with a flap in front and didn’t look very sleek. I got a  good response surveying friends and strangers about a hard case wallet combo and began the project.

Do you have any background in product design?

I don’t have a design background but I’ve been able to work with two amazingly talented people. Ryan Robinson, who graduated from Otis School of Design, transformed my 2D sketches and drawings into 3D CAD designs that really gave me a sense of how CASELLET would look and feel. Dan Martinez who is a product engineer with 20 years of experience was able to take those 3D images and give me insight on structural integrity, affordable material, and design limitations. With the help of the two of them, the CASELLET prototype came to life.

Marketing a Kickstarter campaign is a lot of work. You must build trust with a good video and be 100% transparent. Your immediate connections and 2nd degree connections only go so far. If you truly have a good product, which I believe CASELLET is, then it’s a matter of reaching the audience. Big blogs such as iDownloadBlog, Gizmodo, or Engadget are vital to the success of any crowd-funding campaign. My goal is to reach as many people as I can and hopefully they will appreciate CASELLET enough to support it.

When will CASELLET enter production?

CASELLET’s time frame of entering production is the end of December. We already have quotes set up from manufacturers. The design has been finalized, so now it’s a process of making the tooling, approving the samples, and finishing the packaging. We expect CASELLET to start shipping by the end of January if the project is funded.

How much will it cost?

CASELLET is planned to have a MSRP of $60. If there is a large amount of interest then the price may decrease due to a higher volume order in which case we expect to ship Kickstarter backers some extra accessories for free.

Where will we be able to buy a CASELLET?

CASELLET.com will be the premiere place to purchase our cases. A reseller UPC barcode is something we will try to get approved immediately so that we can start shipping CASELLETs to interested third-party resellers.

Will you give away a few CASELLETs to iDB readers when available?

Of course! We expect to give away more than a few to iDB readers. CASELLET is incredibly convenient and I could sit here all day talking about it, but nothing beats lightening your load every time you leave your house as a testament to the convenience of CASELLET.

Do you have other projects in the pipeline?

Everything has been put on pause for CASELLET for now. Nevertheless, Ryan, Dan and myself, have been discussing the design of other cases to fulfill the wide spectrum of wallet-case capabilities for the future. The one thing that we want to focus on is our process of fulfilling Kickstarter orders at the highest quality before taking on another project.

Interested in this project? You can help fund it by pledging as little as $1. Of course, the more you pledge, the more you get. By giving $40, for example, you will be one of the first to get your hands on a CASELLET, fresh off the production line. Check out the Kickstarter page for more details.