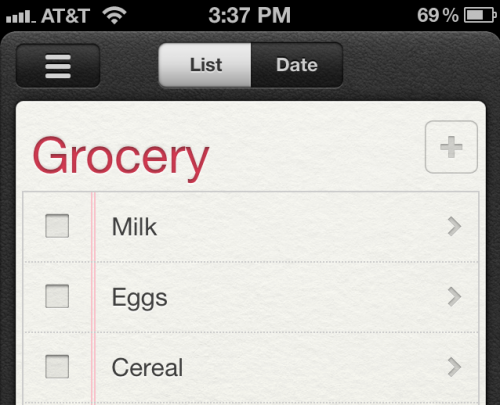 After a week on the market, people are falling more and more in love with the iPhone 4S-exclusive Siri feature. Not only is it fun to ask it questions, but folks are coming up with more and more uses for the digital personal assistant.

We’ve already seen how to integrate the voice command feature with third party list-making apps like Remember The Milk, but did you know that you can use Siri to create lists in the native Reminders app as well? TUAW shows us how…

The Unofficial Apple Weblog posted a nifty little tutorial yesterday on how to create a grocery list in iOS 5’s Reminders app using Siri. It’s actually quite easy to setup, and more importantly, you can add items to the list at anytime using voice commands.

Step 1. For starters, you must create a new list in the Reminders app. To do this, tap the list editor icon in the top left hand corner of the main screen (looks like three lines). Then tap the edit button, and select the Create New List option.

Step 2. Name the list whatever you want. For the purpose of this tutorial, I named the list “Grocery.” Then tap the Done button in the top right hand corner of the screen.

Step 3. Now that the list is created, exit out of the Reminders app. Activate Siri and say, “add [milk] to the Grocery list.” Siri then confirms that you’d like to add the item to the list, and then does so. You can open up Reminders to view the list at anytime.

Keep in mind that the Reminders app isn’t as full-featured as other list-makers, and Siri doesn’t split multiple items up (so if you say “add bread and cheese to the Grocery list,” it adds them as a single item). But for list-making on the fly, this works great.