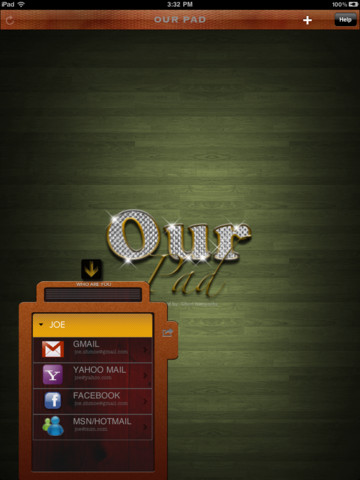 If there is one negative aspect of Apple’s iPad, it’s the distinct lack of any form of user management.

For a device that Apple sells as a real computer, and one that the whole family can enjoy, it’s almost a travesty that Apple never thought to add any system for managing more than one user. What if you want to have all of your Gmail, Facebook, and Twitter accounts signed in 24/7, but your wife or husband also wants to use the iPad? Currently, the only way to manage such a situation is for people to sign in and out of various accounts constantly.

“Our Pad” for iPad aims to fix that particular issue, and for the current price of free, it’s got to be worth a shot…

In the words of the app’s developer, Ghori Networks:

“This app allows you and other family members, spouses and children to login to their favorite social networking sites and email services without having the need to type in a password each time. “Our Pad” manages your sign-in and sign-out and you never have to worry about prying eyes or leaving your private emails open accidentally. Access to your accounts is granted by providing a lock pattern using a series of connecting dots.”

That lock pattern is what makes Our Pad stand out. By adding an extra layer of security, Our Pad avoids the potential hiccup of accidentally leaving your iPad logged into an account you don’t want others to have access to. 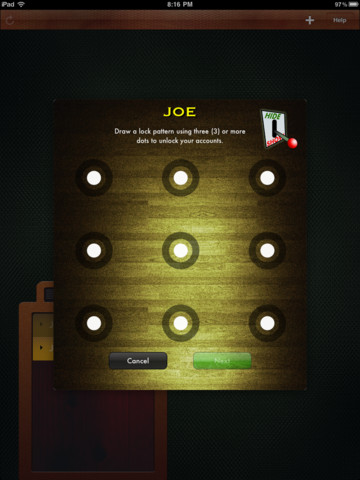 If the lock screen looks familiar, it might be because it bares more than a passing resemblance to the Android lock screen, but we’ll let Our Pad off just this once.

In its current incarnation, Our Pad supports Gmail, Facebook, Twitter, MSN/Hotmail, and Yahoo, which pretty much covers all the bases. The developers do plan to add other services, and they’re even asking for users to suggest which web sites they would like to see added in the future.

If you’re the sole user of your iPad, then you obviously won’t gain much from using Our Pad. But if, like so many people, you share a single tablet with someone else, this may be a great way to stay logged into all of your web accounts.

Our Pad is available in the App Store for free for a limited time.