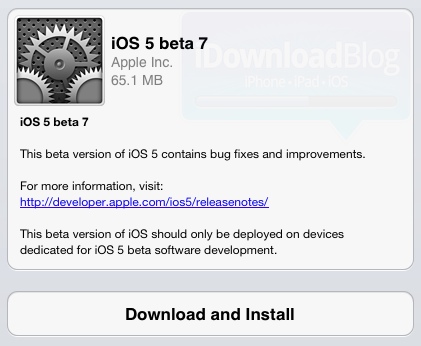 Not even two weeks after releasing iOS 5 Beta 6 to developers, Apple just released iOS 5 Beta 7. If you’re already on Beta 6, simply go to Settings > General > Software Update in order to update your iDevice. That is, unless you are jailbroken, in which case, you will not be able to update over-the-air. But you can always update via iTunes.

Seven beta versions for an iOS firmware is unheard of so far. Apple sure is polishing this new software, which should be released to the public in the next few weeks.

Of course, this is for developers only, or for those of you who like to know what Apple is up to.

Make sure to let us know if you find anything interesting in iOS 5 Beta 7.