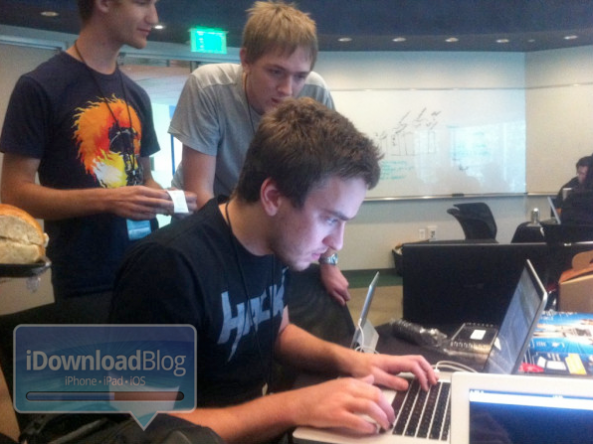 Where has Geohot been lately? We know he recently joined Facebook, but has he had a presence in the iOS developer scene?

George “Geohot” Hotz has indeed been pretty quiet these days, and we’ve all thought that he’s been taking a break from his iOS work to focus on his new job at Facebook. That doesn’t seem to totally be the case, as he’s been spotted coding away at the iOSDevCamp in San Jose, CA.

The above picture was tweeted by a student iOS dev, Max Weisel, at a program called the iOSDevCamp, currently being held at the PayPal HQ. The camp is an “annual not-for-profit gathering to develop applications for iOS, including iPhone, iPad, and iPod touch, using both the native SDK and web standards.”

Max tweeted the above picture of Geohot coding on a MacBook Pro with the tagline, “Geohot’s learning to code all over again.”

Nice to see Geohot back in his zone. Perhaps he’s got a few things he’s working on for the jailbreak community?