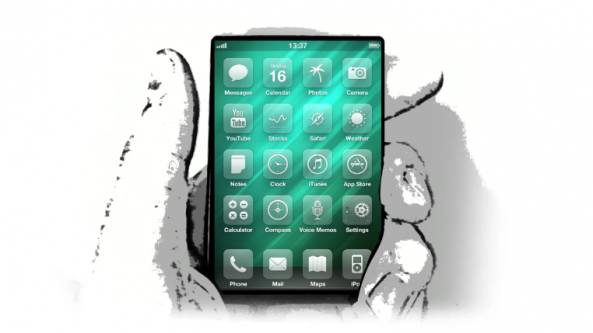 There have been multiple rumors surfacing lately that Apple is working on a smaller iPhone “Nano.” The device is rumored to have a smaller form factor and use cloud-based storage (possibly in accordance with a revamp of MobileMe).

iPhone Nano concepts have been floating around since the rumors gained traction, and a design concept by Max Rudberg stands out from the rest. Max runs Max Themes, and has developed popular jailbreak themes (such as Glasklart and Serious SBSettings).

Max theorized that a smaller iPhone with an “edge-to-edge” screen would need a new and intuitive way to return to the home screen. If the iPhone Nano does in fact have no home button, a new method will have to be put in place for initiating the home screen. Instead of multitouch gestures, Max imagined what it would look like to literally squeeze the sides of the iPhone to close apps.

“If a phone were to be designed with an edge-to-edge screen, it would lack a hardware home button on the front. Therefore it would require a new way to go to the Home screen. Advanced gestures often requires two hands, which is not optimal for such a frequently used feature.

A more intuitive way could be to equip the phone with a pressure-sensitive body. The phone could then be squeezed and the current app would shrink and return the user to the Home screen.

This could be a real wow effect. Seeing how the phone reacts to your grip and then having the app vanish in the palm of your hand.

The strength of a users grip will of course vary. Therefore, a setting for how much pressure that’s needed before an app is exited could be a good idea.”

I’m not sure how Apple would be technically able to make a concept like this possible, but I think Max definitely has something with this idea.

What do you think about the idea of “squeezing” the sides of an iPhone to initiate the home screen?