FontSwap Changes The Font of your iPhone

Well folks, FontSwap finally made its way to firmware 2.x and let me tell you right off the bat that it’s better than ever. Custom fonts on your iPhone are the cherry on top of all your customizations and I had been waiting for that for a while.

Before updating to 2.2, I had some custom fonts on my lock screen and in my notes but to get there, I had had to manually edit some files on my iPhone, which doesn’t come without risk… When I restored, updated and jailbroke my 2.2 iPhone, I really didn’t want to go through the whole process again but thankfully, FontSwap is now making it easy for us to change every font on the iPhone.

So let’s have a closer look at FontSwap… After installing and launching the app, you are given four different font customization options: dialer fonts, lockclock fonts, notes fonts, and system fonts.

The dialier font, like the name says, is the font of your phone dialer. You only have one font option for your dialer, and it’s NeoTech, the font that I had previously installed on my iPhone.

You can also customize the font of the clock on your lock screen. To do so, simply go to LockClock Fonts and you will have the ability to choose from five different fonts, plus the default one. 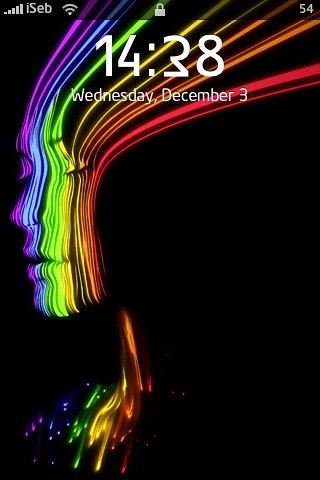 Getting rid of the ugly notes app font has never been easier… Simply choose this option from the menu and you’ll be able to change the notes font to either Calibri, or Notec. 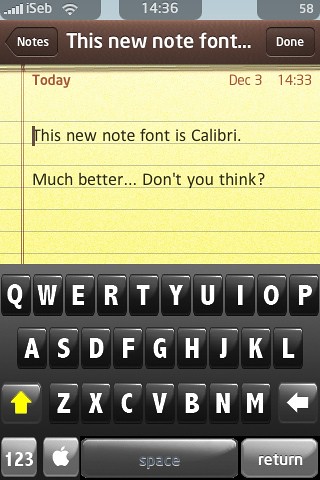 Finally, you can change the system font, which is pretty much everything else on your iPhone. Changing the system fonts will change the font of your SMS and Mail apps. The System Fonts option offers the largest variety of fonts with no less than 10 fonts for you to choose from.

When you choose a font, a message will pop up giving you 3 options: install & respring iPhone; install & relaunch FontSwap; or cancel. I recommend installing and respringing every single time. That may avoid some problems.

I do have a few remarks about this great app. For one, I really would like to see Arial ported to the iPhone. Along with Helvetica, Arial is the easiest font to read, and most agreable to look at, in my opinion anyway.

Second remark is that FontSwap should give you a preview of every font, a la Photoshop, so you don’t have to try every font to see if you like it or not.

Finally, there is no check mark indicating which font you’re on which is kind of stupid as 2 days from now, I won’t be able to remember what font is on my lock screen or in my notes. Gosh, I can’t even remember now and I installed the fonts 10 minutes ago…

All in all, it’s a great app if you want to push your iPhone or iPod Touch customization a notch further. I forgot to mention that this app is available for free in Cydia, which means you’re iPhone has to be jailbroken. That might be reason number 1,643,894 for jailbreaking your iPhone!